Science for the People: The 1970s and Today

This website was created to organize and archive a conference on the history and legacy of Science for the People (SftP), held in April 2014 at the University of Massachusetts, Amherst and hosted by the Social Thought & Political Economy Program. The site will be maintained as a hub for studying the history of Science for the People and for future organizing. We invite visitors to explore the Conference tab for video of all conference sessions, along with abstracts and presentation files for many of the presentations. We also invite you to explore the History tab for historical materials on the movement, which includes many SftP publications along with FBI files obtained through a FOIA request.

SftP Revitalization
Science for the People exists again! Since the 2014 conference, organizers around the US and in Mexico have rallied to create a vibrant new organization. Visit the organization website and check out the new magazine, which has continued where the old magazine left off with volume 22, no. 1. The new SftP has been profiled in Science Magazine and in an article by Rebecca Onion in Slate titled, "A Radical ’70s-Era Group Is Relaunching to Help Scientists Get Political Under Trump". 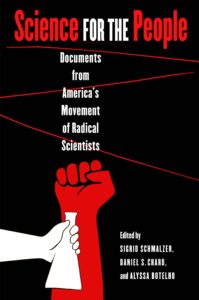 A group of scholars who participated in the 2014 conference collaborated to produce an edited volume of primary sources titled  Science for the People: Documents from America’s Movement of Radical Scientists, published in 2018 by University of Massachussetts Press and now available in digital, open-access format.

The book is intended for students, scientists, STEM workers, and scholars, as well as activists interested in a science that promotes human welfare and ecological sustainability over militarism and corporate profits.

What was Science for the People?

Science for the People (SftP), the most important radical science movement in U.S. history, arose in 1969 out of the anti-war movement and lasted until 1989. With a Marxist analysis and non-hierarchical governing structure, SftP tackled the militarization of scientific research, the corporate control of research agendas, the political implications of sociobiology and other scientific theories, the environmental consequences of energy policy, inequalities in health care, and many other issues. Its members opposed racism, sexism, and classism in science and above all sought to mobilize people working in scientific fields to become active in agitating for science, technology, and medicine that would serve social needs.

Through research, writing, protest, and grassroots organizing, SftP sought to demystify scientific knowledge and embolden “the people” to take science and technology into their own hands. SftP’s numerous publications played a formative role in the field of science and technology studies, challenging mainstream understandings of science as “neutral” and instead showing it to be inherently political. Its members, some of whom held prominent university positions, served as models for politically engaged science and scholarship by using their own knowledge to challenge, rather than uphold, the social, political, and economic status quo. They organized in universities and communities, published a magazine offering sharp political analysis, and sought meaningful scientific exchange internationally in Vietnam, China, Cuba, Nicaragua, and other countries.

Some of the issues we face today have changed in important ways, but fundamental questions of power, ideology, and democracy in science remain. That's why it is so powerful that SftP veterans are gathering with younger generations of scientists, activists, students, and scholars in an exploration of what the history of SftP can teach us… and where we go from here.